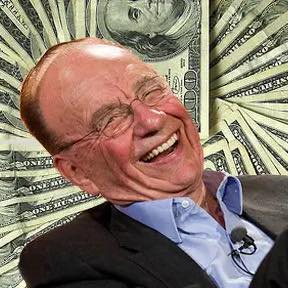 Thought this worthy of further distribution.

“Dear Moonbats, trolls, wingnuts, and assorted old friends and coworkers who’ve fallen under the spell of Rupert Murdoch’s vast right wing conspiracy—yes, Hillary was correct.
.
When you come to a lefty’s page and spew Murdoch-approved talking points, you out yourself at once. There are certain buzzwords that Rupert’s hatchet-men have resolved to promote. Once upon a time, it was the big push over a guy named “Reverend Wright.” And “Soros.” Then “death panels.” Then “Where’s the birth certificate?” Then “Benghazi.” Now it’s “hyperinflation.” And “$375.00 wasted on pots & pans as America suffers.” And “Gas prices have never been higher.”
.
???? BREAKING NEWS ????
.
All that up above? All those headlines? Not news. Tabloid bullshit. LIES. Every bit of it. It was packaged as news, presented as news, plastered all over Rupert’s misinformation networks as news, but it wasn’t. It was—and still is—tabloid garbage that’s carefully crafted in some dank boardroom or studio somewhere, fine-tuned by propagandists who are paid millions of dollars per year for their “talent,” then turned loose on folks like you. Folks who think to themselves; “Well, it must be true, otherwise, they wouldn’t be able to say it on the news.”
.
And then like the good minion that you are, you propagate it.
.
Again: it’s NOT news. It’s bullshit. But thanks to 1) a loophole in the otherwise well-intentioned wording of the 1st Amendment, and 2) a diabolical billionaire who’s figured out how to exploit that loophole as a means with which to enriched himself at the expense of his loyal subjects (many of whom don’t know the difference between chicken salad and chicken shit), Rupert has helped to establish the most dangerous chasm between Democrat and Republican, right and left, truth and fiction, those in-the-know and those-in-the-dark in our nation’s history.
.
His *personal* take in all this? $21,000,000,000.00. That’s twenty-one BILLION. With a “B.” But hey, coming up with lies and smears 24/7 is hard work.
.
So when you come to one of my threads and mention “Joe Biden’s dementia,” or “Kamala Harris’ cookware scandal,” or ask; “When did Tucker Carlson ever lie?” You’re out. You’ve outed yourself. What’s curious, is that even though you’re obviously a committed Foxophile, you insist you’re not. You say; “Oh, I watch Fox, but I also watch MSLSD and the Clinton News Network. Because I want to hear all sides.”
.
You’re a LIAR. And a bad one at that. Busted again.
.
Here’s the deal. Do one of two things. Or better yet, do both: Stop lying to the world and yourself about being a Rupert Murdoch stooge. Say it loud—be proud; “Yes, I watch Fox News! Yes, I believe it’s actually NEWS! Yes, I vote against my own interests because Fox News propagandists have convinced me that I should!”
.
~ Or ~
.
Turn off Fox News. Try getting some *actual* news from a credible news agency. I know Rupert has convinced you that the so-called “mainstream media” is evil, but take a chance. Tune out Mark Levin and try tuning in NPR. What’s the harm in trying?
.
Just don’t come to my wall with Murdoch’s filth, then insist that you “came up with that all by yourself.” No you didn’t. It was methodically, slowly cooked up, then pounded into your wooly brain over a predetermined stretch of costly airtime. And like clockwork, you’ve spread it out over the Internet without bothering to fact-check a single word of it. Because you trust Uncle Rupert at his word. He has YOUR interests at heart. So do Sean, Laura, Tucker, Tomi and Judge Jeannine. They all seem so nice, don’t they? Just good white folks shining a spotlight on the evils of “Critical Race Theory” and Mexicans streaming across the border.
.
Don’t even think about Rupert’s $21B, and you working 50 hours per week for 50 grand a year.
.
Just don’t come here and lie by expecting us to believe that you’re an “independent thinker.” No you’re not. And if you aren’t after what’s happened these past five years, you never will be. You’re just a pawn doing the dirty deeds of some vile, decidedly unpatriotic scum. But you go ahead and hug your flag if it makes you feel better about your contribution to America’s demise.”

(Photo shows Murdoch laughing – at you – all the way to the bank.)


After Bruce Lindner quoted by Occupy Democrats on Facebook.