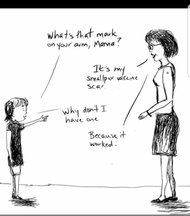 Smallpox vaccinations were suspended in about 1970, almost 193 years after Geo. Washington ordered the inoculation of the American army at Valley Forge with the then-new and experimental direct exposure technique that preceded vaccination, actually infecting the patient directly and leading to an unpleasant illness and sometimes to death. Thousands were inoculated on the say-so of the single, newly appointed general, who had observed the technique during the Siege of Boston. The winter inoculation program allowed the recovered soldiers to participate in the improving outcomes of maneuvers and battles. A case can be made for an important role for vaccinating techniques in the birth of the United States.

Now the upstart Joe Biden is trying to inflict on the good people of the US a hideous vaccine that imposes symptoms so mild as to be unnoticeable in many of the vaccinated. Is he so blind to our national pride that he advocates a preventive rather than a cure. How are we to brag to our grandchildren that we survived the ordeal when the ordeal is but a trifle?

Brave and forthright citizens are resisting across the country, and I say Yes!, let them remain unvaccinated and pure in their belief that unnecessary suffering is the unalterable condition of life. Furthermore, provide them with cots and blankets, water and gruel, that they might lie outside hospitals, eschewing the false treatments of elite physicians and officials, trusting in magic sky beings and allowing others the false hope of beeping machines and filtered air—after all, who knows what's in it?