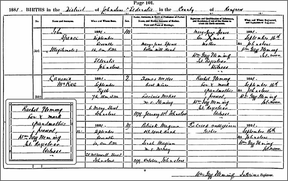 When I was little my grandmother, who was the oldest girl in her family, told me of her older sisters Rachel and Lavinia, who were born in Scotland.

Today I was waiting for a phone call, and I decided to log into "Scotland's People" the web site of the Scottish national archive.

After a quick search I found a birth registration for Lavinia McKee from Ayrshire (SW of Glasgow) from 1881. (Hit a bug on the Rachel record.) It shows that her father was indeed Thomas McKee (he had not yet taken his mother's name Goodwin to make life easier as an immigrant), and her mother was Lavinia Fleming. Also present was Grandmother Rachel Fleming (Lavinia's older sister was also Rachel). (By coincidence the registrar's name was also Fleming; I have no reason to think there is a relationship.)

I have blown up the witness space and placed it at lower left Rachel Fleming apparently could not write her name; she signed with an X.

Rachel's daughter Lavinia Fleming McKee Goodwin is the person I have described elsewhere who began working at the Clark Thread Company in Paisley at age 6. The trade-off was that John Clark the threadmaker (as in Coates and Clark; no relation to the John Clark who was my paternal great-great-grandfather) was an adherent of Robert Owen, the British Utopian philosopher who held that industrial concerns and their owners owed a decent living to their workers and a chance at a better life for their children.

So off went little Lavinia Fleming to the mill every day. She worked half a day spinning thread or some such swell task, and the other half day in school. Unlike most British girls of her era and unlike her mother, she became literate. Since I put all this together during a visit to Paisley and Johnstone in 1986, I have conjectured that that bit of a leg up might have caused her eventually to have different criteria for husband hunting, perhaps to choose someone a bit more ambitious, a bit more promising.

So off went Lavinia Fleming McKee with her husband Thomas to America. And here I am sitting in a soft chair typing instead of hauling coal waste up to the slag heap.

Sadly, the younger Lavinia did not get to participate in the good life of the American west. After arriving in the US and establishing themselves in the coalfields around Braceville, Illinois, Mother and the girls made a trip back to Scotland. Grandmother Rachel had died, and there were details to manage. As the story came to me, Baby Lavinia did not survive her second Atlantic crossing and may have been buried at sea. I believe this was in 1883, as her next sibling was born in Illinois in 1884. Her legacy is her grandmother's inexpensive silver tea set and a few other trinkets.

When I was in college economics Professor Norby made us read the economic philosophers of the 18th Century. At the time it was drudgery. I now think the good prof. did me a favor. What a kick to understand the context of their times as well as to find the paperwork.

When I was in college economics Prof. Norby made us read the Utopian Philosophers, including Owen. "What a yawn," I thought then, but now "What a gift!"

I think this type of research should be required of all students in high school history. Putting one's family history into context can be fascinating; writing it down can be challenging; and sharing it with others helps us to appreciate our common humanity. I look forward to reading your story.