The Goodwins of Colorado 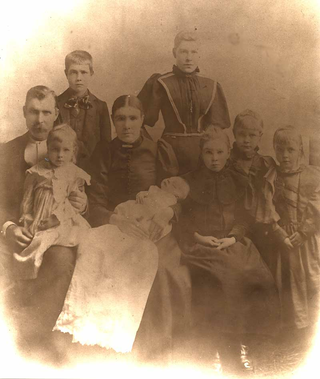 Thomas and Lavinia Goodwin came from Scotland to Colorado by way of Illinois and Iowa, settling in and around Trinidad by the 1890s.

Thomas Sr. was born Thomas McKee, the son of a Scottish workman, also Thomas, and mother Ann McNaught at Beith, Scotland, in 1859. He took his mother's surname to avoid anti-Irish prejudice - though he was not Irish. He had one brother, James McKee/McKay (b. 1857), who later emigrated to Canada. Thomas died within a year of this photograph of a form of cancer; the family later assumed it was due to his many years as a coal miner; the truth will never be known.

Lavinia Fleming Goodwin was born in 1859 in Preston, England. Her parents were James and Rachel (Montgomery) Fleming. She began working at age SIX! in the Clark Thread Company in Paisley, Scotland. Isn't industrial society wonderful?! That's another story; see the Davis pages.

After her husband's death Lavinia operated a boarding house in Trinidad for many years. Rachel, Thomas and Anna all left school to help. All the younger sisters completed high school.