Your browser does not support Javascript, or you have disabled it. Therefore, some portions of this page may not work properly.
ReesClark.com
Clark 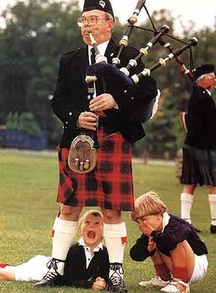 There are lots of good reasons to migrate from Scotland to the USA.

Variations on the Clark tartan as available in 2007 from various vendors.

Apparently if you were a MacDonald between 1805 and 1820 you named your daughter Catherine. No basis for "McMac" choice at this time.

Index record of birth registration of John Clark in 1805.

Scottish archive marriage certificate 1833 for John Clark and Catherine MacDonald. They moved to Canada in 1837.
I come by the name CLARK from John Clark (b. 1805 likely in Selkirk?, Scotland) and Catherine (Kate) MacDonald (born in Perthshire), who migrated from Scotland to Canada in 1837. Among their six children were daughter Margaret and sons John Judson Clark and his brother (my great-grandfather) Frank Alexander ("Alex") Clark, who were raised in Ontario, educated in New York, founded businesses in Wisconsin, and numbered among the earliest settlers of Everett, Washington in 1892 (see The Puget Sound Country, WA state archives, and various local histories).

Alex married Belle Perry (daughter of Ambrose Perry of New York, Michigan and Wisconsin), 1874 graduate of Berlin High School, Berlin, WI, who claimed to be related to the nautical Perrys of the early 19th century, though I haven't reconnected the links. Belle lived until 1903 and is buried in Everett, WA, in a family plot she shares with no one.

The name "Clark" in its present British form goes back at least 600 years and originally denoted from church and other clerical occupations requiring literacy. It was unambiguously a surname after 1300 CE; it appeared on the "Ragman Rolls" of Scotland in 1291 as "le Clerk" (the alternate spellings no doubt derive from the shift in vowel sounds that divided Scottish from English pronunciation in the ensuing centuries - try elongating the A as AE and trilling the R).

The Clark Tartan. Tartans were associated with Scottish clans and no doubt fraught with mystic significance, though most of the hundreds available today are of modern origin and are designed to go with the drapes and the carpet. The graphic elsewhere on the page shows the CLARK tartan as depicted on various historic and commercial sites. This one may be either several hundred years old and derived from the "neutral" tartan worn by some clergymen to let them pass unscathed among various factions and clans, or, depending on whom one asks, it may be a "Sir Walter Scott" tartan created after the 18th century restrictions on tartan use ended in the reign of George IV.

Clark: This long-established surname is of Anglo-Saxon origin, and is from a medieval occupational name for a scribe or secretary, or for a member of a minor religious order. The word "clerc", from the Olde English pre-7th Century "cler(e)c", priest, originally denoted a member of a religious order only, but since the clergy of minor orders were allowed to marry and so found families, the surname could become established.

It should also be noted that during the Middle Ages virtually the only people who were able to read and write were members of religious orders and it was therefore natural that the term "clark" or "clerk" would come to be used of any literate man, particularly the professional secretary and the scholar. Surnames became necessary when governments introduced personal taxation. In England this was known as Poll Tax. Throughout the centuries, surnames in every country have continued to "develop" often leading to astonishing variants of the original spelling. Early usage does not distinguish clearly between profession and family.

One Richerius Clericus, Hampshire, appears in the Domesday Book of 1086. The first recorded spelling as the family name is apparently that of Willelm le Clerec, which was dated 1100, in "The Old English Byname Register of Somerset", during the reign of King Henry 1, known as "The Lion of Justice", 1100 - 1135. An early governor of Edinburgh Castle around 1190 was named Clerk, but it is unclear whether that was a position or a surname. Other early recordings include: Reginald Clerc, noted in the Curia Regis Rolls of Rutland (1205), and John le Clerk, registered in the "Transcripts of Charters relating to the Gilbertine Houses", Lincolnshire (1272). In the modern idiom the surname can be found as Clark, Clarke, Clerk and Clerke.

When translated into Gaelic it becomes Chleirich, resulting in Mac a'Chleirich - son of the clerk (surviving mainly in McCleary, or MacChlery, often anglicised recursively back to Clarkson).

Richard Clarke (no relation) was noted as a passenger on the "Mayflower" bound for the New World in 1620. Lawrence Clark, together with his wife, Margaret, and son, Thomas, were famine emigrants who sailed from Liverpool aboard the "Shenandoah", bound for New York in March 1846.

The name also appears in Italian as di Clerico, in French as le Clerc, in Dutch as de Klerk, in Swedish as Klerck and Klarck. Several other European languages have an equivalent, such as Schreiber in German. and as Swedish Klerck (derived from at least two 17th? Century Scottish naval officers in the service of the King of Sweden*).

In Japanese, Clark is spelled クラーク, and so it goes.


(* The Vikings knew how to make boats, of course, and how to fight on them, but apparently their descendants forgot, and Adm. Clark (later Klerck in Swedish), being a British gentleman, politely reminded them. The name lives on in Sweden and Finland.)
Whence this RC?
Visit this experimental family tree. Includes some excursions.

Another Relative from Wisconsin, B'gosh!
24-Feb-2008
By A. Rees Clark
WA State Archive article sheds light and
J.J. Clark, Frontier Merchant
24-Dec-2006
John Judson Clark was my grandfather's uncle and was an early Everett, WA, businessman, diversifying into real estate and general business development. If nothing else, this is a great example of laudatory late 19th century prose.
We have met the Perrys, and they are (may be) us
10-Jun-2006
RC's research casts doubt on the relationship to the nautical Perrys of the 19th Century.
According to...
10-Jan-2005
Some Clark nomenclature from one more interested than I.
Great-great Uncle John J. and the Westward Movement
30-Dec-2004
A train ride that set the stage.
F.A. Clark Obituary 1914
30-Dec-2004
From the Everett Herald.
Great-grandfather Frank Alexander Clark
30-Dec-2004
A biography from Wisconsin days.

From a series of taciturn folk who told few stories, we've learned only this:

O.E. clerc, from L.L. clericus "a priest," from Gk. klerikos (adj.) in church jargon "of the clergy," derived from kleros "lot, inheritance" (orig. "a shard used in casting lots"), used by early Gk. Christians for matters relating to ministry based on Deut. xviii:2 reference to Levites as temple assistants: "Therefore shall they have no inheritance among their brethren: the Lord is their inheritance," transl. of Heb. nahalah "inheritance, lot." If the word choice was meant to remind clerics of anything, however, the reminder was lost with the knowledge of ancient Gk. Modern bureaucratic usage is from c.1500, a reminder of the dark ages when clergy alone could read and write. After Etymonline.com, a very cool etymology site.

We're lucky to have marriage records for John Clark and Catherine MacDonald. There is usually no way to trace definitively names prefixed Mac vs. Mc or the third form - now rare - M'. Before the late 19th Century no one made the Irish vs. Scottish distinction, which is principally a result of anti-Irish chauvinism in Britain and the USA. After the hundred year hiatus of things Scottish that began in 1745 (the Br. Crown forbade wearing tartan, for example), followed by the return to Britain and flight to America of tens of thousands of so-called Scotch-Irish during the potato famine, the Mcs and Macs all started spelling their names according to the fashion of the times, which later got institutionalized. IMHO any American or anyone else who claims he really knows what grandma did every day (and night) of her life is a fool, anyway; this is about historic curiosity, not historic reality. The treasures come with linking oneself with some degree of probabability with eras, times and peoples, and in finding the links to one's contemporary friends, along with some interesting surprises. Within the Clark and Goodwin families, the letters I have say "MacDonald" and MacKay (except for the ones that say McDonald and McKay and McKee - that's my story, and I'm sticking to it/them, clear?

The term "clericus" was originally applied to someone in a religious order but it was later applied to anyone who was a secretary, scribe, scholar as well as a cleric in the church. It is therefore not surprising that this occupational name became widespread when surnames began to be used. At the end of the 12th century, a Roger clericus held land in Kelso and in 1249 Alan clericus was a witness to a charter in Aberdeen. There were nine people from Scotland with that name who signed the "Ragman Roll" when King Edward I of England demanded in 1296 that all landowners had to swear allegiance to him. However, it is only after 1400 that we can be certain that it was being used as a surname rather than as a description of someone's occupation or status.

There was never a Highland clan of the name Clark. However, it is frequently found among the Clan Chattan confederacy. Clarks appear to have been a sept (under the protection) of the MacPhersons (whose origins were also from the church, "Mac-a Phearsain" meaning in Gaelic "son of the parson" in the days when celibacy of the priesthood was not enforced).

The name is common throughout the Lowlands and Highlands of Scotland. It is particularly prevalent in Caithness and there were important families of Clarks in places as far apart as Aberdeen, Edinburgh, Paisley and some have become landed families with baronetcies.

Two unrelated Clarks reached high office in the Swedish navy in the 17th century and the name is found in Sweden and Finland in the form Klerck. The American explorer George Rogers Clark (1752-1818) was of Scottish descent.

The tartan used by the Clerks is a variation of one called "Blue Clergy" which was worn by ministers, though in its present form it dates from the re-invention of tartan after the visit (orchestrated by Sir Walter Scott) of King George IV to Scotland in 1822.

Clark was the 14th most frequent surname in Scotland at the General Register Office in 1995. The name is also common in England where it is often spelt Clarke. In the USA it ranked 21st in the 1990 census (following 20 others even more rank).

Clark is regarded as a sept (sub-branch) of both Cameron and Macpherson.

(After RampantScotland, whose version looks a lot like several others that they no doubt did not copy.)
Home • Genealogy • Miscellany • Contacts • Podcast