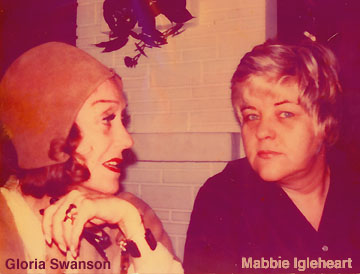 "We're ready for our close-up, Mr. de Mille." Gloria Swanson and Mabbie Igleheart, circa 1965-75.
During the 1970s, my paternal first cousin Mabbie Igleheart and a friend founded Total Energy Systems, among other businesses. TES was built around a technology for "true pyrolysis" of organic waste. Pyrolysis is the process of superheating solid waste such that it gassifies. As the gasses cool, they yield carbonaceous byproducts that can be burned or recycled. Done right, the volume of material is substantially reduced and little or no material needs to be buried or otherwise sent to landfills.

As Mabbie told the story, she got interested in the waste problem due to the influence of the actress Gloria Swanson, whom she had befriended during her many years in Hollywood.

It seems that Ms. Swanson was among a small number of public figures who tuned in early to growing problems of our planetary environment. Mabbie said that Gloria Swanson once made her ruin a pair of shoes as they traipsed about on a southern California landfill while Swanson went on at length about how she was too old to do much about the problems of land and water pollution and that it was Mabbie's responsibility to act in some meaningful way. I deduce that this must have been in the late 1960s or early 1970s, but I'm not certain.

TES set out to save the world. In the process, Mabbie and her partner sought a lot of investment, built a demonstration pyrolysis system and ultimately failed when they could not sustain the effort as age caught up with them. Every hour became every day became every week. I worked for TES for a while in 1992 and lost my own shirt writing and polishing business plans with some other cousins. In the end it was all for naught, not because the idea was wrong, but because the problems were insidious and easy to hide, and because the competing technologies were, though themselves polluting and inefficient, backed by some really big players who could afford to take county councillors to lunch in really nice places.

Mabbie Igleheart was born in December of 1932. Although she was my first cousin, we met only as she was approaching 60 and in failing health from a long history of living too fast, trying not to miss anything.

To an only child, she and her siblings Leslie and Geri were mysterious forces, "out there" somewhere in exotic places called "Chicago" and "Florida." My unknown cousins, often mentioned but never seen. Leslie kept his perfect score until the end, leaving a wife and four daughters I've yet to meet; Geri and I crossed paths only twice in our youth and once as young adults.

In 1992, in an odd twist of fate, I met Mabbie and Geri again and spent most of that year with them, not for reasons of family but because we shared an interest in technologies for handling pollution. I spent about six months with her all told, and it was fascinating.

She was married once, or twice, or not at all. She was straight, bent, and curvy, rejecting and embracing religion. When she and TES finally collapsed, her long-time partner, with whom she had worked for years in alternating joy and rancor, descended to devour the remains.

All those years, I never knew what to believe. Cynically I thought at times it was all a lie or at best a fantasy. And then when my father, her uncle, died in 1996, I found this picture.